Hanging in a Museum: every artist's dream

Here's some crazy, exciting news: my painting Vintage Sleigh Bells will be hanging in a Museum! It's been accepted to the International Trompe L'oeil Exhibit at the John Peto Museum - quite an honor! The show runs from May 15 - Sept 5th, so I like to think of it as a semi-permanent museum acquisition (wink wink)

I first visited the John Peto Museum for a painting workshop. It was pretty special to be painting in the studio of the accomplished still life and trompe l'oeil artist in Island Heights, NJ. And just my luck - their International Trompe l'oeil Show was on exhibit in the gallery at the time.

So what exactly is "trompe l'oeil"? Basically, it's French for "fool the eye" and, generally, it does. This style of painting has been around since Vesuvius. It was part of the Renaissance exploration of perspective and reached a higher level of illusion and tom-foolery with Flemish and Dutch painters in the late 1750s. Works typically include still life objects set up in a shallow space, where shadows create the illusion of depth. The objects are generally painted at actual size with unusual details, like peeling tape or a fly that just landed on a window sill - or even a hand reaching out of a well-rendered frame. The result is that the subject appears to have has been captured "as is." A popular motif in the 1800s was the old fashioned "letter rack" - an early kind of bulletin board - with papers and notes tucked under crisscrossed ribbons. Guess you could say my sleigh bells are kind of a barnyard version of that.

John Peto did many trompe l'oeil paintings. He was an American artist painting in the late 1800s in New Jersey. He also created traditional still lifes, but in my opinion, his trompe l'oeil paintings were much more interesting. A contemporary of William Hartnett who was a bit older and more successful, Peto gained prominence when several of his paintings were actually mistaken for Hartnett's. At the time Hartnett was in important museum collections and Peto was not, so it was a fortuitous confusion.

Below is John Peto's classic Letter Rack and to the right is his Reminiscences of 1865. Letter rack paintings such as these often chronicle an event or tell a story so including a variety of objects is helpful to reinforce the narrative.

I'm not sure if trompe l'oeil is having a resurgence of popularity in general... or just for me. On a gallery-hunting trip in CT two years ago I came upon the work of Michael Theise, a contemporary painter who often paints money. Such skill! Also, the gallery that was representing my work in Guilford, CT held an exhibition of still life and trompe l'oeil by master painter Ken Davies along with other atelier artists working directly with him, including Theise. Quite a coincidence.

I've always found trompe l'oeil effects kind of fascinating and actually incorporated them in decorative painting many years ago. So I guess that's what gave me the nerve to submit work to the Peto Museum. "Hey, you never know...!"

Below are some simple trompe l'oeil designs from those earlier decorative painting days, painted with acrylics on wooden furnishings. (Not great photos, but you get the idea.) 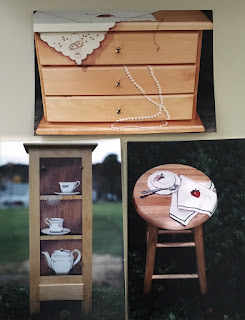 The sleigh bells in my painting for the Peto exhibit actually belong to friends who, for generations have fooled the ear, if not the eye, of their little ones by jingling the bells to surreptitiously announce the arrival of Santa's reindeer. Many thanks to Audrey and John for entrusting this family heirloom to me!

If you're interested in seeing the International Trompe L'oeil exhibit in Island Heights this spring/summer, check out their link. According to the exhibition committee, "We received an unprecedented number of entries this year and the quality of the artwork is very high." Well that sounds pretty darn wonderful!

Thank you for joining me on my artistic journey.
Posted by dorothy lorenze at 4:32 PM