About using photos... or not

My time at Weir Farm is already half over. Hard to believe. So far I have completed five interior and still life paintings and half a plein air painting. I've also been invited on some interesting tours by rangers and volunteers that add to my appreciation of the history of this site. One tour centered on love letters between Julian and Anna as a way to get to know them better. Very sweet.

Being here really does ignite the creative spirit, even though I am not able to set up my easel and paint within the historic home or studio. Working from photos is not typical for me but since I can still re-visit the locations, I don't mind. To be honest, there is "controversy" among artists about painting from photos. People tend to fall into one of two groups:
Some of us are a bit less dogmatic. Honestly, everyone has different creative goals and can forge their own path. For me, the goal is to work from life whenever possible and use photos only as a "Plan B". Like extending the life of a perishable still life when grapes are becoming raisins. Or when a National Historic Site invites you to paint on campus...but not IN the historic rooms. I had to adjust my process here. First I explored with a camera and took as many photos as I thought I might need. But I also had access to return to locations for more photos, clarification or inspiration. The Park Rangers and staff have been very accommodating.


This is my set up in the studio, with photos displayed on a large monitor - 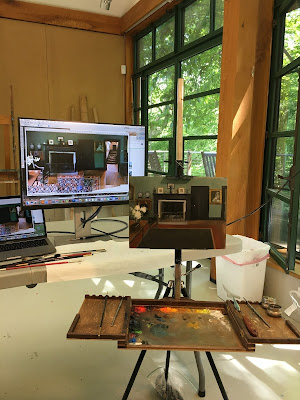 One advantage to using photos is that it's easier to create a two dimensional painting from a two dimensional image. Perspective and foreshortening are easier to see, as spacial relationships are flattened in 2D. And this, I believe, is one objection by artists in group #2 above. It's easier: less blood, sweat and tears.

But it's also true that paintings done from photos can look flat. Cameras can only see a small percentage of colors compared to what our eyes can see, so much of the richness is lost. I think if you've been painting from life, it's easier to realize what's missing when you have to work from photos. The best way to have that understanding is to spend time drawing and painting from life.

This pantry is pretty simple looking but it had perspective challenges. It was hard to figure out from photos because I couldn't back up far enough to see where the angles converged, but going back to the space I was able to compare which walls were truly parallel or perpendicular and make sense of it.
Some artists object to the use of photos on the grounds that it's not traditional, the old masters didn't rely on cameras. But I personally question that. Artists are generally creative problem solvers and I can certainly imagine Leonardo da Vinci being fascinated by a camera. In fact, given time, he probably would have invented it!

In 2001 David Hockney wrote Secret Knowledge a book about how he believed early painters used optics and lenses with the camera obscura to trace images onto canvas. You can see the BBC episodes about it here and here. It's interesting but I think the more fascinating study of master artists relying on mechanical assistance is found in the film Tim's Vermeer, available on youTube. It's an amazing demonstration of a non-artist recreating a painting using mechanical visual aids. What I think is especially worthwhile is his observation of how light is diffused over distance. It's an important concept for representational artists because it helps create depth, enhancing realism.

Photography is a helpful tool but my feeling is that it shouldn't replace drawing from life. Drawing is about training your eye to see and spending time with the subject to get to know it better. That can help in so many ways beyond rendering form well. The time spent drawing and observing helps you decide what to enhance and what to exclude, decisions that can make a better painting.

Here are some of my latest Weir Farm paintings. I took photos of this room from every angle. And although, in the end I chose this image, I used the others to get more information about where the light was coming from, and especially how light affected patterns on the wallpaper and carpet. This one is not finished yet, still need to fine tune areas, but it was a good example of how using multiple photos gave me more information.
After all the time-consuming tediousness of the first few interiors, I needed to return to my comfort zone and do a little still life. This is a scene from Weir's studio so it was also painted from a photo. I'm sure that my time painting still life from life helped give this little painting some of its richness.

Tomorrow I get to choose another scene to be inspired by at Weir Farm. And later this week I hope to join the rangers in their workshop about discussing artwork with the public on tours. That should be really interesting!

Thanks for sticking around through this long post. It's been a busy and very interesting journey these past few weeks!

Posted by dorothy lorenze at 11:21 PM