Rembrandt and Capturing Carpets in Oil

Ah, I'm back in my studio (home-sweet-home) having returned from Amsterdam, Brussels and Bruges where we were immersed in the creative milieu of these medieval cities and literally walked in the footsteps of Rembrandt, Vermeer and Van Eyck.

First we dropped in on Rembrandt. It's impossible to explain what it feels like to stand in the home of a master artist. His studio is on the fourth floor, reached by an extremely narrow and steep, winding staircase which may be why there was no one else up there. That quiet peace added to the sanctity of the space. It actually took my breath away. 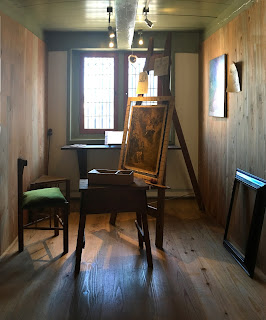 This still life hangs above a glass case with Rembrandt's actual still life objects which were discovered in rubble beneath the house. Imagine seeing the actual objects with the painting! 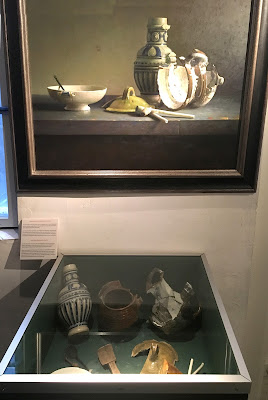 I have to admit I spent a good bit of time in Amsterdam searching for a version of an old Rembrandt-esque jug or stein. No affordable antique pottery was found, but I did get an old, pewter coffeepot with a wonderful patina - to be featured in a painting soon, I suspect.

After struggling to paint oriental carpets recently I appreciated seeing how textiles were painted by the Dutch masters. Some were very detailed and others had just a suggestion of pattern. An example is this section of Gerbrand van den Eeckhout's painting, The Wine Publisher's Guild. I'm sure the guild members are meant to be the focus... but look at that pattern. Van den Eeckhout was actually apprenticed to Rembrandt in the 1660s. I admire the detail here - fabric, barrel and copper - but then you look at Rembrandt...
... and this is poetry. Rembrandt's painting is a similar theme, called The Syndics of the Clothmaker's Guild. Ironically the job of these syndics is to judge the quality of cloth samples. Yet, the exotic fabric seems like the least important element here. It's painted very simply but still conveys the richness and texture typical of classic tapestry fabric. The vibrant color speaks volumes against the black suits and white collars.
In this close up you can see how simply the pattern is rendered. Still, the contrast of bright color and muted shadow describes the richness of the fabric beautifully. It's more passive than van den Eeckhout's fabric but more compelling. And I know... the fabric is not supposed to be the important part of the painting, but at the moment, for me, it is.
My quest to examine tapestry began with the struggle to paint oriental carpets at Weir Farm last month. The first one is Weir's living room and while I have said that being at the residency provided a "new perspective" unfortunately, my first version of this painting also had a "wrong perspective" because the right side of carpet was totally off. By inches. Fixing it meant repainting the entire rug since the angle of the edge also changed the angle of the pattern on the rug. That was not a happy realization. But it's much better now.
The carpet in the next painting is bit more developed which I think works because there is less of it. You may have noticed in my still lifes that I can obsess over detail (!) so it was hard to decide how much pattern to include - or more importantly, leave out. Even so, I really enjoyed rendering all the patterns on carpet and wallpaper in this painting. The bust on the table is actually Julian Alden Weir, hence the title "Weir, Waiting in the Foyer."
So, after a month at Weir Farm and two weeks of traveling, the current "new perspective" is about getting back to a comfortable, productive routine in my own studio. Lots of ideas waiting to be realized. I'm anxious to get back to it although it does feel like another new start. So, wish me luck.

And one additional happy update. During the residency, I had displayed my painting East Meets West in the studio as inspiration since the Weir dining room includes lots of blue china that I hoped to paint. One rainy day a family admired the painting and, much to my surprise, contacted me later to purchase it. So I delivered East Meets West to a proper Scotsman visiting his family in CT. They were very gracious, offering tea and biscuits. And now the painting is going "home" to Scotland. Jolly good, as they say!


Thanks for joining me on my artistic journey.